Fans founding in the early AC/DC years get a kind of jealous recognition when talking about concerts or meetings before 1980.

Well, both special guests at this year's AC/DC fan meeting in Geiselwind were much closer: Mary Renshaw was considered to be Bon's companion and soulmate for many years and immortalized her memories in the book "Live Wire: A Memoir of Bon Scott by three people who knew him best".

None other than Irene Thornton is our second special guest this year: She was married to Bon in 1972. During their marriage, Bon was in a band called Fraternity, his move to ACDC followed with the rise of the band and marriage separation and divorce in 1977.  Her book "Bon Scott: Have a Drink on Me" was released in May this year worldwide. In 2014, "My Bon Scott" was released in Australia and New Zealand only and is now out of print.

The Orgateam is very glad to welcome Mary and Irene. Of course, they will have their books with them and sign while the collectors' fair on Saturday.

On Saturday afternoon there will be a live question and answer session in the MusicHall with Irene and Mary: So think consider which questions you always wanted to ask the two ladies from Australia. 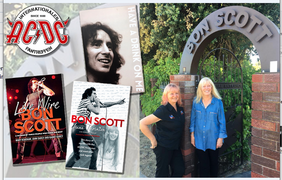